A Process of Remembering: Heritage Day through the lens of the ArtbankSA Collection

Home / JOURNAL / Articles / A Process of Remembering: Heritage Day through the lens of the ArtbankSA Collection

Culture is not fixed. It ebbs and flows from one generation to the next. Our ancestors and elders bequeath to us gifts of knowledge and embodied knowing. Yet sometimes we forget. When the rituals that contain and connect us are lost, we become untethered from our communities and unable to contain the depth of wisdom acquired before us. Heritage Day offers an opportunity to remember. Not only to bask in the richness of our own traditions, but also acknowledge and appreciate the customs of others.

The artist and designer, Primrose Chimhanda, pays homage to different cultural groups peppered across the country. After obtaining a degree in architecture, Chimhanda transitioned into the space of surface design and digital art. However, the architectural influence in her work is very visible in her geometric designs. The recent series of prints acquired by Art Bank of South Africa (ArtbankSA) honours a distinct visual iconography of different communities. Soweto (2020) depicts a contemporary style. The iconic Orlando Towers, which once operated as the cooling towers for a coal-fired power station, remain a prominent landmark. A potjie pot, shisanyama and clinking beer bottles speaks to how ‘breaking bread together’ creates community. However, this rich cultural space is not without challenges: quenched taps and disconnected pylons reflect the lack of service delivery in the township. The piece Bo-Kaap (2020) clearly references a formerly segregated suburb of Cape Town. The area was known as the ‘Malay Quarter’ and holds much cultural and historical significance. Established in 1844, the Nurul Islam Mosque is visually implied in the work through the star and sickle moon. The Bo-Kaap is often characterised by brightly-coloured houses, but for this piece Chimhanda has chosen a restrained palette of red and white. Representing a parallel history of colonisation, Cape Dutch (2020) references an architectural style introduced by the Dutch settlers who first arrived in the Cape in 1652. The 17th century design is most widely recognisable through its distinctive central gable on farm and country houses. In the design Chimhanda has also included an oak leaf and acorn – a botanical species introduced to the region during the colonial period. Similarly, the cobalt blue design points to the Chinese and European blue and white porcelain brought to the Cape by the Dutch from the 1600s. The juxtaposition of these two prints speaks to a complicated history and multiple narratives embedded in one geographic landscape. Historically the 24th of September was dubbed ‘Shaka Day’ to commemorate the Zulu King Shaka’s passing in 1828. Since then, people in the community have gathered together at his grave in honour of his memory. Similarly, AmaZulu (2020) pays homage to traditional iconography. The oval-shaped cowhide shield flanks either side of the central image of circular compounds of cattle kraals and iQukwanes, whereas AmaXhosa (2020) illustrates the conically-shaped rondavels which traditionally were made from mud and thatched grass roofs. Both prints draw on a blue, red and white colour palette to generate distinctive patterns. It is refreshing to see a shifting discourse around vernacular architecture and increasing appreciation for the ingenuity behind it. Chimhanda tells a story through architectural references, constructing cultural blueprints that celebrate diversity and difference.

Photographer Mandisa Buthelezi’s work is centred as an exploration of identity and spirituality. She feels called to document and sustain cultural memory through her creative practice. The evocative piece, Maidens of the Nazareth Baptist Church (2019) forms part of a larger project to capture the cultural ceremonies of one of the largest African- initiated churches in the country. Founded in 1910 by missionaries, the church coalesces Christian and Zulu customs. Spiritual camps are often held to instruct a religious education. The maidens are divided into two groups: amaSheshakungena are the younger maidens and the older ones are called amakhosazane. The striking black and white photographic work captures three maidens shrouded in their white garb. The candid moment evokes a sense of honoured awe and mystery – a lens into the sacred and the unknown. 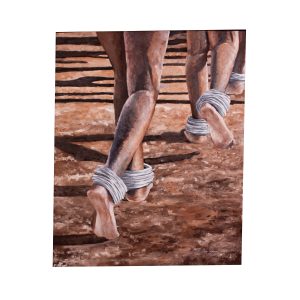 A moment of ritual is also depicted by Takalani Ligege in Best Foot Forward (2018). The artist is from Thohoyandou in Limpopo and takes pride in representing Venda culture. The painting is part of a series, ‘Dancing Shadows’ in which Ligege illustrates the beauty of traditional customs. He believes that artists are cultural custodians of their people and are duty-bound to preserve heritage. The layered brushstrokes render limber legs in motion. Ankles are adorned with vhukunda and cast elongated shadows onto bare earth. During the culturally significant ‘Domba Python Dance’, during the final stage of an initiation into womanhood, young maidens form a single-file dancing line to wind along a path like the great python. Best Foot Forward offers a call-to-action, that regardless of genealogy, we can honour our forebears and dance a path for our future.