An Ode to Human Rights 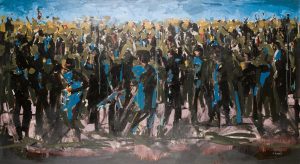 The earthy ochre tones and dark scrawls in Asanda Kupa’s Chained in blue (2017) evoke a mass of figures united under a banner of resistance. The canvas appears as an eruption of expressive marks and dynamic energy. The piece seems to summon songs and chants for freedom. It is an especially poignant piece in the Artbank of South Africa’s collection. In an interview Kupa describes how, “I use crowds as a symbol of oneness, that everything is connected, and all is one”. For the Molteno-born artist, representations of civic action and occupation are central themes in his work. Growing up in a poverty-stricken area has coloured his experiences and spurred his desire to represent subjugated peoples whose lives are defined by a lack of access to basic resources. Chained in blue has an uncanny resemblance to both the protest actions that pepper our history and the predicaments of our present.

Historical remembrance often stems from bloodshed. On the 21st of March 1960, what began as a peaceful and nonviolent protest, ended in a tragic loss of life. At the time, the Pan Africanist Congress proposed an anti-Pass campaign to rally against the tyrannical rule of the apartheid government. The Pass Laws Act of 1952 decreed that all Black South Africans over the age of sixteen were required to carry their passbook at all times. These identification documents chronicled extensive personal information including photographs, details of employment, permission to travel to different parts of the country or seek work in the area. Those caught traveling anywhere without it, faced arrest and imprisonment. Under these repressive laws, over two hundred and fifty thousand Black South Africans were incarcerated for technical offenses each year. The ‘dompas’ operated as a tool to control and limit mobility of the oppressed. It soon became a despised symbol of apartheid rule.

On the morning of the 21st of March 1960, communities gathered in their numbers to call for the abolition of the Pass Laws. The intention of the protest was to strategically use the same laws to bring the economy to a standstill by filling jails to capacity across the country. Protestors arrived outside the Sharpeville police station without passes and presented themselves for arrest. The peaceful protest of approximately five thousand people, was met with violence. Without warning, panicked police fired live ammunition at unarmed civilians. For two long minutes, it rained with bullets. By the afternoon, sixty-nine lives had been lost and one hundred and eighty more injured.

News of the massacre swept across the country like wildfire. In response, a group gathered at the Langa Flats bus terminus in Cape Town. This assembly of protestors was in direct defiance of the government’s country-wide ban on public meetings. The police ordered the crowd to disperse. When protesters reconvened in opposition to their demands, the police charged at them with batons, tear gas and guns. A further three people were killed, and twenty-six others hurt. The devastating day exposed the apartheid government’s cruel and calculated violation of human rights to the world. Decades after the Sharpeville Massacre, President Nelson Mandela signed South Africa’s first post-apartheid constitution near the site in 1994: an act that symbolically acknowledged the sacrifice made on that day in defense of dignity. 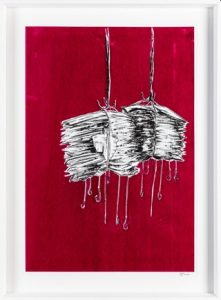 The Bill of Rights is a foundational document of South Africa’s democracy. It stipulates that everyone has the right to have access to adequate housing. Kenneth Shandu’s works often explore issues of marginalised people and their experiences of post-apartheid South Africa. Doused in red, Virgo (2018), portrays paper stacks suspended in mid-air from pronged hooks. The stirring image evokes the scales of justice with an undertone of piercing violence. Shandu astutely notes that social exclusion is created and sustained through inequality, “whereby increasing unemployment, lack of affordable housing and social economic policies still continue to create a huge gap between rich and poor people”. His works have sought to bring attention to the housing crisis. Staggering figures have shown that at least fourteen thousand people are living on the streets of Cape Town and a further fifteen thousand are without homes in Johannesburg. These statistics have dramatically increased due to the effects of the Covid-19 pandemic. While it is important to pay homage to the past, the fight for human rights is not over. The great leader Mandela once said, “For to be free is not merely to cast off one’s chains, but to live in a way that respects and enhances the freedom of others”.