Bullets or Books: A commemoration of Youth Day 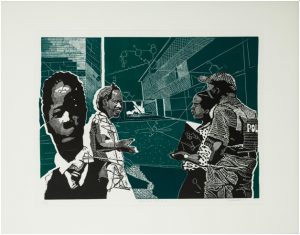 A day when bullets rained down, clouds of noxious gas infiltrated airways and peaceful protests were met with violence, the course of our nation’s history was irrevocably changed. On June 16th we honour the sacrifice young people made in the fight for freedom. The Soweto Uprising that started in 1976 spread like wildfire across apartheid South Africa. The spark that lit the proverbial match was the enforcement of Afrikaans alongside English as the medium of instruction across schools. Students objected and with few other means to voice their dissatisfaction, they planned a protest action.
Bodybuilding Supplements Are Harmful To Brain Health – Health Thoroughfare bodybuilding forum australia buy tren – us bodybuilding store: bodybuilding seriously
The apartheid government had established the Bantu Education Act two decades earlier, in 1953. The introduction of this policy aimed to centre the education of black South Africans around creating a mass manual labour force. Under this system, many schools did not have such amenities as running water, electricity, capacity in classrooms or sufficiently trained teachers. By design, these factors created a context of sub-standard education. In the 70s, anti-apartheid sentiment grew within student communities through the formation of the South African Student Organisation (SASO) and the rise of the Black Consciousness Movement. With many political activists away in exile, students began to rally together.

Between three and ten thousand students staged a peaceful protest on the 16th of June 1976. The young protestors were meant to congregate in Orlando Stadium. However, on their way to their meeting point, they were met with a militarised police force. The police fired off live ammunition and teargas on students. The violent response of the State resulted in approximately seven hundred deaths, with countless others injured. The tragic image of the mortally wounded Hector Pieterson, being carried by Mbuyisa Makhub while his sister Antoinette Sithole runs alongside them, has been immortalised in our collective memory. The photograph by Sam Nzima and the brutality of the police incurred international outcry, which eventually aided in the dismantling of apartheid.

In honouring this historic event and the impact it had, works in the ArtbankSA’s collection provide insight into issues experienced by the youth of South Africa. Artist Sifiso Samuel Gumede’s Education not police also strikes a chord with the recent spate of police brutality and murders of African Americans in the USA. Gumede also often explores social issues affecting townships. The title of the work is carved into the brick-and-mortar facade of a school.  In the foreground an image of a child, dressed in a uniform, appears. Behind them is a figure of a woman, seemingly in conversation with a teacher and policeman. Hovering above them is the outline of a structure for an organic compound, perhaps highlighting the importance of science in the curriculum. The teacher, holding a book up to her chest, is partially obscured by the policeman. In view of the Soweto Uprising, any presence of police in schools is met with a level of distrust. This sentiment is also evoked by the title of the piece.

There are several long-lasting effects of Bantu education on our schooling system. Polokwane- based artist, Thato Motana, has rendered images of students on national examination booklets. Limpopo’s matric pass rate is often ranked lower (along with the Eastern and Northern Cape) than other provinces in South Africa (Business Tech, 2021). In the 2020 senior certificate exams, seven schools in Limpopo had a devastating 0% pass rate (Baloyi, 2021). The availability of resources and funding seemingly predetermines students’ fate. Motana’s piece underscores the challenges students face in attempting to pass matric and secure their academic futures. 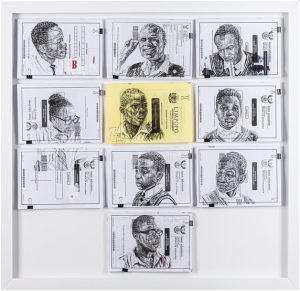 A lack of resources is not the only thing that students in South Africa have had to contend with. The COVID-19 lockdown had a dramatic impact on schooling nationwide. Basic Education minister Angie Motshekga noted that the pandemic diminished teaching and learning time by almost an entire term (Business Tech, 2021). While some schools and their students were able to migrate online, those without access to data and digital devices have been even more severely impacted. Victor Geduldt’s hyper-realistic painting, After School, depicts a context that may perhaps adumbrate such a reality. In the piece, two school children appear to be walking home from school, with their backs to the viewer. The surrounding landscape looks bleak. One can only hope that the future of our students looks brighter than the blood-stained past. 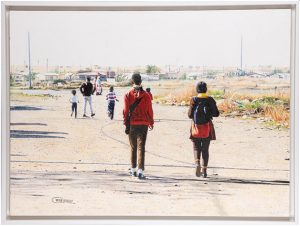