Finding Cohesion in the Cacophony

In my initial encounter with the 2019 acquisitions of the Artbank South Africa, I found myself scanning the works, searching for a singular voice – a central concern within the collection. Instead, what answered my call for clarity was a cacophony. Some subtle whispers, others murmurings, desperate pleas and even in some instances – joyful exclamation. On reflection, the possibility that a collection premised on such diverse representation, from across the country, would have only one voice, is absurd. It is an important reminder of the value of plurality, especially in a context filled with such varied experiences. 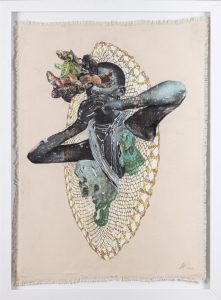 However, South Africa is also a context in which our differences have historically been contorted and exploited. Divisive attempts to instill distrust and fear amongst us have repeatedly resulted in grave violence, enacted against one another. These are the scars of the past that our young nation has yet to fully heal from. In response, a call for unity from leaders, dubbed ‘social cohesion’, often reverberates through microphones and televised screens during public addresses.

Although recently popularised, the concept of social cohesion is in fact an evolutionary cross-species phenomenon. Anthropologists Jacob Taylor and Arran Davis (2018) argue that humans, however, “are unique in the specific evolved cognitive mechanisms through which sociality is sustained, namely, the capacity for shared cultural representations and the ability to forge and maintain affiliative social…bonds” (Taylor & Davis 2018: 1). Our ability to co-operate and connect is central to the fabric of our society. Although at times, this capacity is not fully realised. 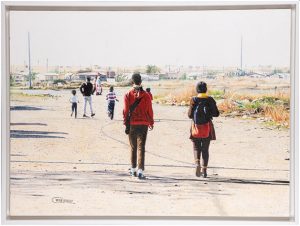 Despite being a social necessity, social cohesion is often described as a future hypothetical. Seemingly lost in the mists of ‘one day maybe…’ the term itself can become quite slippery and even at times, vulnerable to reinterpretation, misrepresentation and manipulation. In light of this, I particularly appreciate the contained definition devised by scholars at the Southern Africa Labour and Development Research Unit (SALDRU) in Cape Town. They offer that, “Social Cohesion is the extent to which people are co-operative, within and across group boundaries, without coercion or purely self-interested motivation” (Burns et al. 2018: 10).

It often seems much easier to collaborate with people we identify as being part of our own communities – whether that be confined within class, cultural, racial or gendered lines. However, the simple, yet nuanced, explication of social cohesion outlined above, appeals to a quality greater than our sense of individual identity. This is not to discount the value of identity, but I would argue that it is important to resist homogeneity and social insularity.

What does art have to do with this? As previously mentioned, shared cultural representations are central to developing social cohesion. Artists act as weavers of meaning. They thread together the cultural contours of our country, often translating their experiences into material forms. Whether printed, painted or performed, the product of introspective art-making can evoke a wide spectrum of emotions. Awe, angst, disbelief, depression, desire, elation, euphoria, frustration, grief, gratitude, guilt, horror, joy, jubilation, melancholy, nostalgia, rage, remorse and peace. These are the things we feel. These are the encounters we witness. These are the experiences we live through. 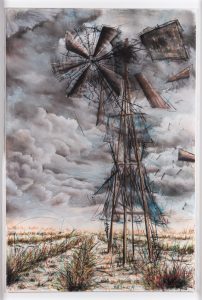 Artists are able to reflect on the past, observe the present and imagine the future. Artbank SA aims to honour their voices. The works in this collection explore a rich thematic tapestry: some artists depict the material conditions of poverty and violence, the realities of urban and rural living as sites of movement and migration. Poetic portraits reflect on notions of masculinity and the social effects of gender-based violence. Others offer pointed questions about what it means to be custodians of the land. As a chorus or cacophony, developing social solidarity does not require that we deny our difference, rather, that we develop an empathetic understanding and respect for one another. In the pages that follow, you will find these voices visualised, speaking to the concerns they feel most deeply. 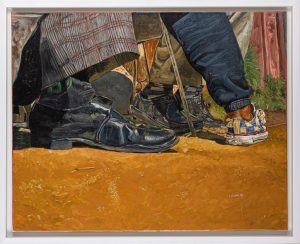