Mourning the Shadows: A reflection of Women’s Day

Over the last year, the pandemic has cast a long shadow over our lives, but while the national lockdown saw an overall decline in crime, acts of Gender Based Violence spiked dramatically. According to Amnesty International, in just the first week of lockdown, 2 300 calls for help were made to the South African Police Service. Only three months later, a tragic tally of twenty-one women (and children) had been killed by their intimate partners. Although necessary to prevent the spread of COVID-19, the lockdown has created a context in which many women are trapped with no way to escape the violent hands of their abusers.

Normative gender roles and the unequal power dynamics perpetuated by patriarchal society are some of the root causes of GBV. With already one of the highest rates of femicide in the world, the pandemic has created even deeper fissures of poverty, inequality and unemployment in South Africa. These factors all contribute to what has been dubbed the shadow pandemic gripping our country. 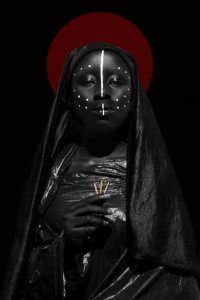 Addressing the dark and violent underbelly of our society requires generating awareness of these important issues and creating structural change. Artist, Lebo Thoka’s powerful work entitled Karabo Mokoena (2016) pays homage to the young woman by the same name, who’s life was brutally ended by her ex-boyfriend. Karabo Mokoena was stabbed twenty-seven times, had her body burned with acid and set alight. When on trial, her murderer showed no remorse for his actions. In the photographic piece, Mokoena is represented as a serene and dignified figure. Her gaze is unwavering. Each aspect of the work feels intentional. Her hands clutch three matchsticks. The black plastic rubbish bag covering her body references the dumpsite where her remains lay. Thoka’s work sensitively reveals the conditions of Mokoena’s passing while also drawing on religious iconography in this narrative piece. Enshrined and memorialised, Karabo Mokoena is more than a victim. She is a woman remembered. 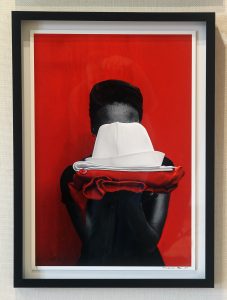 In acknowledging a generational absence, Thalente Khomo honours the memory of her late grandmother in Umnikelo (2019). The loss of Khomo’s family matriarch has been deeply felt since her passing in 2004. In the striking photographic image, a red uniform is gently held in hands outstretched, concealing the figure behind. Khomo’s grandmother was a woman of devout faith, the carefully folded cloth represents the iconic attire worn by members of the Methodist Church of Southern Africa. As a religious woman who worked in domestic service, Khomo has fond memories of falling asleep to her grandmother singing gospel songs. The title of the piece translates to ‘offering’, the work pays homage to a beloved elder who lived her life in the service of others. Umnikelo captures what the artist calls “the spiritual side of shadows” tracing a trajectory of grief, catharsis and cleansing.

Kimathi Mafafo is connected to her mother and grandmother through the medium of her work. Her mother was a seamstress and her grandmother practiced embroidery. On a metaphorical and material level, these threads bind her matrilineal lineage together. All the stitches on Mafafo’s panels collectively create a celebration of black women. During her most recent ‘Voiceless’ series, she collaborated with Ghanaian tailor, Mustapha Saadu. Together they produced a series of embroideries that focus on women who, due to cultural and social expectations, experience a sense of powerlessness in relationships. Mafafo challenges historical stereotypes around gender inequality in South Africa, which perpetuate the conditions for intimate partner violence. In the work, the figure of a woman is cloaked and alone. She foregrounds the white cloth of a draped and translucent veil. A confetti of delicate blooms surrounds her. The alluring lush and abundant landscape offers a utopic alternative to the painful realities faced by many.

Let us mourn the loss we have endured and honour the memory of women who even in death are dignified. There is great power and potential for catharsis in remembering, but also in cherishing those still among us. Together there is hope that we can heal.  To quote the poet Rumi, “the wound is the place where the light enters you.”