The Day of Reconciliation: A Layered History

Home / JOURNAL / Articles / The Day of Reconciliation: A Layered History

The Day of Reconciliation: A Layered History

The sixteenth of December is a day steeped in significance. It has been named, claimed and also retrospectively framed. During various moments of history this day has commemorated anguished battles and victories, based on the dominant perspective. The calendar date has embodied distinct memories and often opposing meaning for different communities across South Africa. Marked as junctures in time that significantly changed the social and political contours of the country. In reconciling our remembering, are we holding space to redress the absent voices and suppressed cries missing from our national narrative?

In 1838 the Battle of Blood River took place between the Voortrekkers and the amaZulu. Following the conflict, the sixteenth of December was known as ‘Dingane’s Day’ after the Zulu King, until it was renamed in 1910 as ‘Day of the Vow’ to commemorate the Voortrekker victory. More than a century later, in 1961, Umkhonto we Sizwe (MK) was established to forcefully oppose racial segregation and apartheid rule.

Then, on the sixteenth of December 1995, the date took on a new meaning. The sentiment behind the inaugural gathering was to resolve our tumultuous history in the spirit of national unity. The Day of Reconciliation was celebrated as a public holiday in South Africa for the first time. As a means to restore harmony in the face of division and a blood-soaked past. 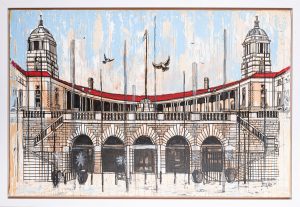 Several works in the Art Bank of South Africa(ArtbankSA) collection speak to notions of layered histories. The pieces are available to loan and offer nuanced insights into the cultural context of South Africa. Taiwo Gbenga Ohu’s painting Union Buildings (2019) is an ode to the South African seat of government. The structure was initially completed in 1913 after being designed and built by the British architect Herbert Baker. Ohu’s paintings often depict the striking architecture of culturally significant sites. The prominent landmark of Tshwane took almost three years to construct. The Union Buildings consist of two symmetrical administrative blocks that are joined by a central semicircular wing. The premise behind the design was to signify connection between opposing forces of identity during the Union of South Africa (1910 – 1961). Since its inception, the site has housed many important events, including the inauguration of Nelson Mandela, the nation’s first democratically elected President.

A century after its construction, the Union Buildings was formally recognised as a National Heritage Site. Now, as a marker of the democratic ideals embodied by its architecture, the red-roofed turreted building is represented with painterly precision. Ohu’s work captures the exacting symmetry and impressive stature of the structure, while generating a sense of movement through illustrations of birds in flight and a free-flying flag. The abstraction of the nation-state is often seemingly intangible; however, architecture plays a prominent part in articulating ideology in a concrete form. 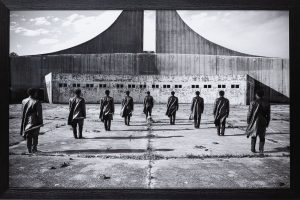 Monuments carve deep marks on the landscape as well as the passage of time. As vessels of memory they encapsulate social and ideological shifts. Thando Mama’s photographic piece Izingqi Zesikhumbuzo (2016-2017) is an exploration of the relationship between monumental structures and national identity. He describes how, “whilst commemoration work is a multiplex and fluid process, monuments tend to fix memory in their authentication of the past.” The Ntaba KaNdoda Monument in the Eastern Cape is captured in this piece. The monument was officially unveiled on the 14th of August 1981 by the former Ciskei President Lennox L. W. Sebe as an attempt to commemorate the pseudo-nationalities of the former Bantustan.

The site itself contains a multitude of historical narratives. Before the advent of British colonialism, the mountain on which the Monument lies had been home to the Khoi, the San and the amaXhosa peoples. ‘Ndoda’ alludes to the Khoi chief who perished during the wars with the amaXhosa under the reign of King Rharhabe in the eighteenth century. Mama hauntingly writes that the Monument, “cloaks the graves of long dead warriors buried on its grounds, as their stories wither from our collective memory.”

Izingqi Zesikhumbuzo is a multi-layered photograph which offers a lens through which to see Ntaba kaNdoda through the eyes of the artist. Mama’s experiences reconfigure the site as a memorial of entangled memories. The work uncovers a tomb of erased history. “My photographs of the Ntaba kaNdoda Monument counter the passing of time that has eroded our memory of this sacred place and acknowledge the negligence that have robbed us of our heritage.” He calls on us to remember. Only in doing so, can we release memories beneath the mausoleum of our cumulative amnesia.