‘We’ve been here’: Art exhibition in celebration of Women’s Day

Figure 1: Installation view of We’ve been here at the National Museum, Bloemfontein.

All over the world the ongoing struggle for women’s freedom and rights constitutes the basis of many women’s rights movements. This was a process that already started in the eighteenth century in Europe demanding freedom of religion, voting and property rights, and the abolishment of slavery. As Julie Peters and Andrea Wolper (1995:2) argue in Women’s Rights, Human Rights: International Feminist Perspectives,[1] women’s groups and organisations all over the world working on grassroots level on national policies have been pointing out gender based abuses to women. These include “inequality of opportunity in education, employment, housing, credit and health care; rape and domestic violence; reproductive freedom; the valuation of child car; and domestic labor”. To complicate matters, traditional human rights matters have been based on a normative male model (Peters & Wolper 1995:2). This means that the historical delineation of rights has been largely defined by men, not taking into account the specific problems of women.

The 1995 Fourth World Conference on Women: Action for Equality, Development and Peace in Beijing, convened by the United Nations, was seminal for the determination of women’s rights, leading to the adoption of the Beijing Platform for Action. Conference presentations contended  women’s issues, such as how gender-based violence could have largely gone unnoticed; why women’s rights generally have been excluded from human rights issues; and whether legislation can protect women from culturally sanctioned discrimination and abuse (Peters & Wolper 1995:4). Similarly, women’s freedom and rights are of particular interest to South African women, not only in the historical context of colonial and apartheid abuses of women’s rights, but also for those still existing in the present-day South Africa.

South African women have played a major part in mobilising the country towards independence and freedom, and their role are acknowledged and celebrated in the We’ve been here exhibition. To this end the ArtbankSA curated a selection of artworks by female artists from its contemporary collection. Themes relating to women’s freedom and rights issues were curated to include a sense of history, and an awareness of the past informing the present; freedom of religion and movement; self-worth and dignity; newly emerging identities; contemporary dilemmas; and hope.

In Figures 2 and 3, Audrey Anderson’s two monoprints, The yesterday and The today, 2017, the titles of the works present the South African past and its present as two distinct and significant entities by using the article of “The”. The two works are similar in composition, with a figure depicted as walking through the forest on a pathway. In both works, it is not clear whether the figure is entering the forest or exiting, or whether the figure is lost in the forest. Yet metaphorically, the act of walking suggests process, a movement between points; and the image of the forest suggests entanglement or battle or struggle, maybe even confusion.

Such a sense of place and time is also apparent in Figure 4, Alexandra Karakashian’s Beneath II, 2017. The title suggests a reading of not knowing ‘what lies beneath’ and the abstract expressionist character of the work leaves it open for interpretation. In this sense “beneath” could be viewed as referring to anything that is obscured, lying unnoticed and invisible buried in the past, or even the present. In terms of the specific context of women’s liberation for which this work has been chosen, it could be interpreted as applicable to women’s histories of abuse and oppression.

A photograph simulating an etching, Thalente Khomo’s Nostalgic (2017, Figure 5) could be interpreted as depicting street children under blankets connecting through touching hands. However, the title of the work suggests nostalgia for the worry-free simplicity of youth through imagery of children playing. Once again there is a sense of past and present in the work, and the awareness that the ‘now’ is not so ‘easy’ and uncomplicated. Maybe reference is made to the socio-political and -economic situation of the country, but it could also be viewed as a general comment on adult life and its worries and complications.

Celebration of close relationships and connections are evoked by the work, similar to Leanne Shakenovsky‘s multi-layered The good grandmother, 2015 (Figure 6), in which motherhood and familial relationships are homaged. Constructed through several layers of lace and patterning and based on the digital reworking of a portrait, the work presents multifaceted identity, layered with history, albeit generational. The artist’s use of lace and patterning in various materials, such as plastic, paper and cloth, presents a contemporary impression of identity constructed through societies becoming more and more multicultural and global.

Laayla Jacobs (Figure 7) also comments on society with regard to religion in her work Explosion, 2018. Being Muslim, she references her religion in critical fashion as commodity and sometimes public display through the use of pom-poms (mostly associated with cheer leading and craft) in the shape of an explosion resembling a slaughtered animal, collaged on top of a prayer mat. In subtle way she evokes reference to Muslim rituals of halal, but also the Muslim problems of terrorism and public unrest.

Violence and crime in South African societies, manifesting in citizens’ fear of violation and attack, are depicted in the image of security fencing in Nicola Holgate’s Neighbors 3 (Woodstock) of 2018, Figure 8. The rusted roof of the old Woodstock house in the Cape evokes colonial history and the arrival and settling of the Dutch in the 1600s in the area, although it was already inhabited by the Khoikhoi at the time. Litter, drugs and crime turned Woodstock dangerous in the second half of the twentieth century when it became run down, although subsequent urban renewal has taken place.

Ilené Bothma’s (Figures 9 to 11) imagery of heads covered in lace and crochet in Conditional threat, Idle threat and Empty threat of 2016 echo women’s experiences of fear of safety in the face of the high levels of crime and rape of women in South Africa. No hair or other features are visible on the figures, almost reminiscent of criminals with balaclava caps.

Whilst the abuse and constraint of women have not disappeared, and problematic societal conditions continue to present tribulation, the exhibition also contains works in which the joys of women’s new-found freedom and emancipated identity in the post-apartheid are depicted. Such a work is Lebohang Motaung’s Pabala 2018, Figure 12. Her female figure’s hair is styled in contemporary African fashion with a partially shaved head and plaited hair pieces, adorned with flowers. The contentment of choice and freedom of movement are celebrated in Vanessa Tembane’s Amor sagrado (Sacred love) and Um dia na praia (A day at the beach), both 2018 (Figures 13 and 14). A nanny with a baby; a parent with a child playing in the sun; a couple getting married on the beach; and people enjoying the ocean render the happiness entrenchment in the celebration of family and love in a context of independence and lack of restriction. 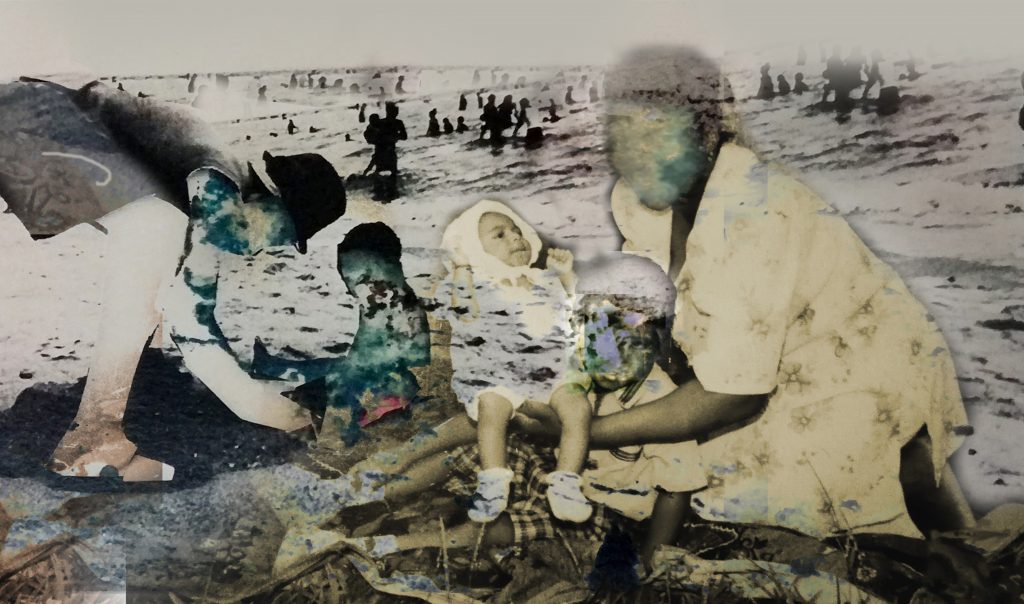 Self-worth is expressed in Figures 15 and 16, Manyatsa Monyamane’s Khathazile Hlatshwayo and Peggy Monyamane, both of 2017. Although having suffered in their lives being children of apartheid, the two mature women stand proud and dignified, their eyes glimmering with confidence. In their portraits they are presented as elegant ladies that are comfortable in their own skins and fine-looking in old age. The portraits signal hope and dreams of prosperity; and a belief in the future. Such sentiments are also evident in Lizza Littlewort’sTaking measurements and The Planting, 2017, Figures 17 and 18. An outlook of taking stock of the past and measuring the current situation is communicated, a cultivation of positive endeavours to weed out the bad and stimulate growth are expressed in the two works. The round, tondo shapes speak about the worlds we live in, we create and can change for the better.

This is what the women of South Africa have done and are still doing. 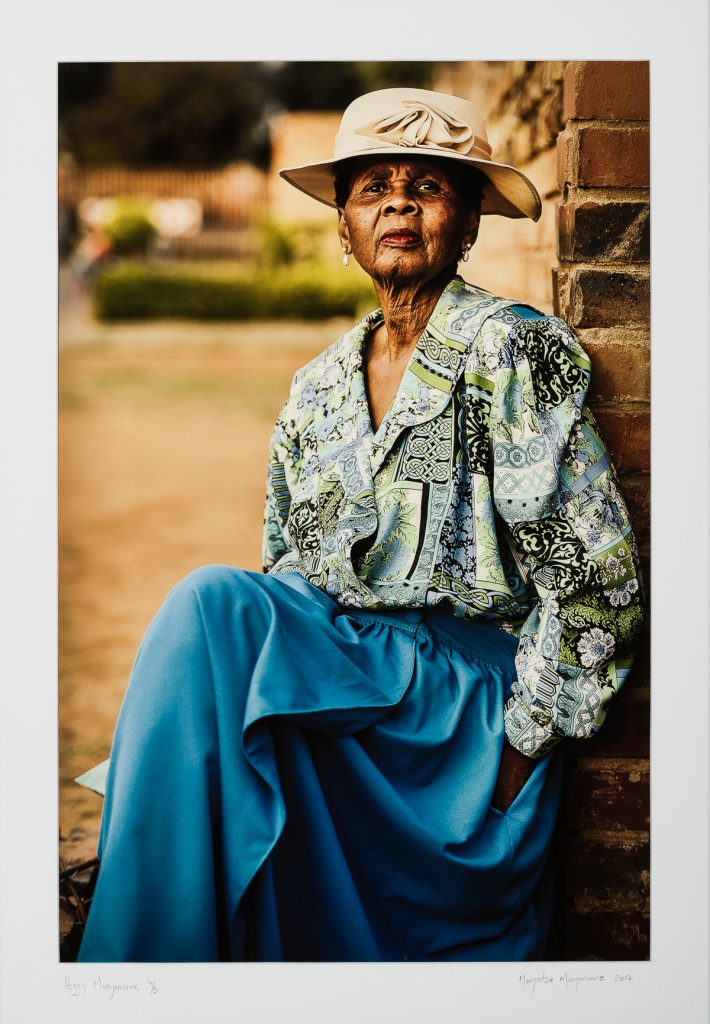 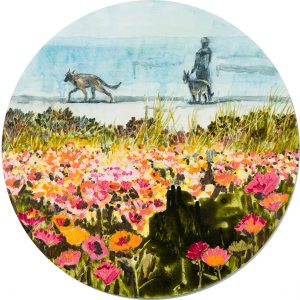