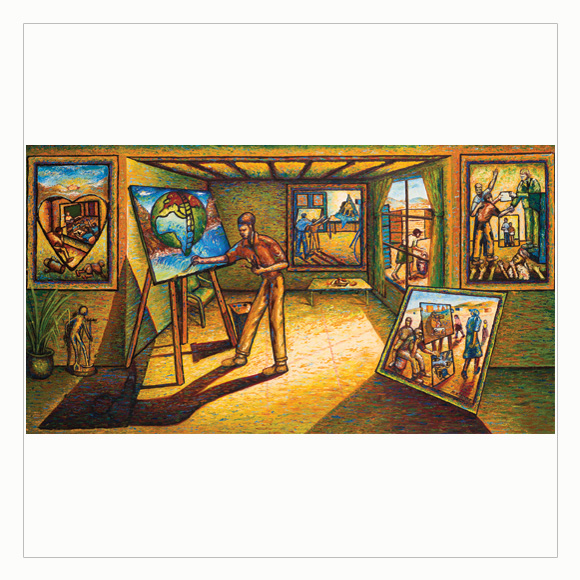 Motsoeokae Klas Thibeletsa was born in 1960 on a farm in the Sout Pan area outside of Bloemfontein.

Following his community’s forced relocation to Thaba Nchu in the 1980s, he applied for work as a cook at the Gedult Mine in Welkom and worked on the mines between 1990 and 1995. On one of his vacations from the mines, he completed a short course in art at the Mmabana Art Centre in Thaba Nchu.

Realizing that this was his passion, he left the mines in 1995 to start practicing art full time.  From 1997 to 1998, he was an assistant tutor at the Mmabana Art Centre, allowing him time to teach and to paint. In 2000, he won the Sasol New Signatures Competition and his work was chosen to travel to Germany as part of the Expo 200 Germany Hanover Exhibition. Thibeletsa has entered and participated in numerous art exhibitions and competitions, winning various prizes and gaining considerable experience including as that of art facilitator and art teacher on numerous interventions, as well as the National Artist in School Project and the Robben Island Emerging Curator Programme.

In 2015 he participated in the National Flagship Project in Social Cohesion and the Visual Arts, facilitated by the Institute for Reconciliation and Social Justice of the University of the Free State. Through this project he was tasked in to implement a further social cohesion project, using his own visual art as dialogue point in the small rural town of Smithfield, Free State.