Painting as medium in the Collection of the ArtbankSA

In the ArtbankSA Collection there are several acquisitions in the three principal painting media of oil paint, water colour and acrylic paint.

In the ArtbankSA Collection there are several acquisitions in the three principal painting media of oil paint, water colour and acrylic paint. In The rebirth of painting in the late twentieth century (2000), Donald B. Kuspit argues that painting remains the foremost medium of the visual arts, in terms of its potential for innovation and influence on other modes of art making, but also in terms of its sensual potential to effectively carry and express human condition and emotion.

Painting as a broad category includes a variety of media, each having their own distinct properties, character and application, which artists use to express themselves and achieve pictorially the conceptual idea or intention underpinning the making of the work. The properties of painting media include constituency (what it is made of), transparency, resilience (durability), substance (thickness and texture) and colour.

Historically, painting is an ancient two-dimensional medium harking back to prehistoric cave painting of some 40 000 years ago. The oldest type consisted of hand stencils and simple geometric shapes using various pigments applied to cave walls and other surfaces. Since then painting has evolved through many stages of development to a point where almost anything is possible in terms of painting: there are different kinds of paint; artists combine paint with other media producing mixed media works; and even digital painting has emerged, not using physical paint, but its properties of colour, texture and particular mark making.

In contemporary art production, painting is still a primary medium, although the tradition of painting has undergone much deconstruction. Especially since the middle of the twentieth century, artists have started experimenting with painting as medium induced by the invention of acrylic paint, which mixes well with other media and materials, but also as a reflection of a postmodern mindset that was sceptical about the master-narratives of the past and favoured less traditional and ‘purist’ ways of artmaking. On one hand this has been the result of new developments in technology and industry, but on the other hand it was also an obsession with novelty and an attempt to work progressively in order to find new ways of using painting innovatively. It is possible to argue that some artists just work in the media and materials they have available, but technically contemporary artists choose the media that will best express their ideas or concepts.

Through the examples of the selected paintings discussed below, it is evident that artists make choices for specific media to express their emotions, viewpoints and experiences.

Painting in the ArtbankSA Collection

Let’s consider some of the acquisitions in the ArtbankSA Collection in the three principal painting media of oil paint, water colour and acrylic paint.

Grounded in political history of South Africa, Asanda Kupa’s work in the ArtbankSA Collection, Chained in blue (2017) uses the thick, expressive substance of oil to depict the emotional turmoil and trauma of people on the periphery of society: jobless and homeless, and struggling to survive with lack of access to basic resources. Depicting the crowd as armed with some form of weaponry, the dense figuration creates a sense of coercion, up rise and protest. The alarming noise of the chanting and yelling crowd can almost be heard and their repetitive stomping and dancing is visually rendered through the vertical repetition. The middle ground of the work depicting the rowdy crowd contrasts with the lighter foreground and sky area and compositionally three tonal ‘bands’ have been constructed. The artist engagement with a social issue and the socio-political comment is strengthened by the compositional as well as colour choices. 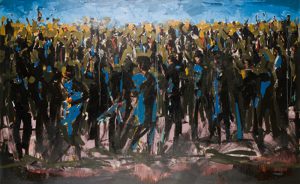 In contrast, in Mashudu Nevhutalu’s Auntie’s blue dress (2017) the figure is motionlessly posing, allowing for a more traditional portrait in a range of blue tones and undertones. The use of lush oil paint as an ‘embodied’ medium promotes the painting of the sensual qualities of portrayed skin, textile and surface. The warm orange and brown of the skin creates an effective contrast and a focal point in the painting. Another device the artist used to create focal interest around the figure was to contrast the white of the shirt with very dark shadow areas around the figure. In this way the work speaks of excellent compositional technique. 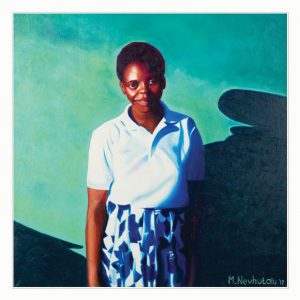 Note: The medium of oil paint involves a process of using commercial pre-mixed and manufactured tubes of oil paint, or a process of making one’s own paint. Fundamentally oil paint consists of mixing pigments with a binding medium of oil. The choice of oil determines the paint’s chemical processes of yellowing, drying time, consistency and lustre. Initially in the 12th century, oil paint was used for decoration purposes, but the medium then (during the Renaissance towards the 15th century) started evolving into a recognised, established art medium. During this time artists made their own paint using the natural ingredients, and many still do so today. Tubed oil paint was invented in 1841 by portrait painter John Goffe Rand during the time of Impressionism. Soon after, in Modernism at the beginning of the twentieth century, oil paint became deconstructed as the principal medium for creating two-dimensional artworks as artists broke away from tradition and started exploring other media alternatives. Today there are also water-soluble options available with tubed oil paints. The medium of egg tempera is also an ‘old’ medium related to oil paint involving the addition of egg yolk to pigment and oil binder (to produce water-based egg tempera, oil can be left out).

An acquisition of the ArtbankSA Collection, Wessel van Huyssteen’s work, Bundle (2017), forms part of his water colour series, How to paint a highway. In his artist statement, the artist states that his series was inspired by travels on the N1 and that the paintings are of “debris, mainly tyres, collected on the shoulders of the highway … painted in forensic detail – reminiscent of topographical art” (https://artbanksa.org/profile/wessel-van-huyssteen/). His departure point for the imagery is mainly the shredded leftovers of accidents that happen on highways.

The artist deconstructs the traditional ‘purist’ use of watercolour by combining it with rubber latex, and in the referential context of highway and journey, rubber latex strengthens the conceptual base of the work. Bundle conjures associations of a traveler with a little bundle of personal belongings going somewhere. A bundle – of whatever kind – is usually small and implies a tying or wrapping together of things to carry as a package. Travelling implies time, moving from one point to another, and a human condition of non-permanence; in this way the artist produces comment not only on contemporary states of nomadic mobility and movement, but also on a fundamental human condition of frailty and temporality. The delicate, see-through medium of watercolour thus supports the conceptual base of the work.

Note: Water colour (also aquarelle) is a paint made with pigment combined with a water-soluble binder such as gum arabic and applied to paper or vellum. Water colour is water based and its particular attribute is its transparency. There is no white in watercolour, therefore it is mostly done on white paper so that white can be obtained through leaving the surface bare where needed. Due to its transparency, water colour tends to be ‘pale’ and very suitable to portraiture; to expressing fragility and frailty in any form; and to soft landscape depiction. Although water colour is often the first choice for children and hobbyists, it can be developed to a highly sophisticated level, requiring advanced skill.

Azael Langa has applied a fragile smoke drawing on top of acrylic paint in Mobile home (2017), using acrylic in a transparent, water colour character. The dried acrylic as a first layer allows the carbon deposit of candle smoke as medium to adhere to the surface. Like in Van Huyssteen’s Bundle, the ephemeral, transient medium of smoke speaks to the nomad identity of the figure, being homeless and on her way to another temporary shelter, carrying all her possessions on her back. The figure leans forward, accentuating her attempt to move on and force her journey away from where she is at present. A faint horizon of a city suggests that she moving either to a new urban environment or from a rural area to the city. 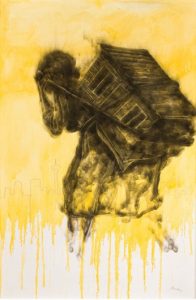 In Jeannette Unite’s Geo-seam: Mineral matters (2016), mined material has been incorporated into archival acrylic emulsion, in order to create an alchemical mix of metals, salts, mine residues and oxides. By mixing these earth materials with synthetic polymer acrylic, a comment is set up on the contemporary industrialised world that is becoming more and more plastic, synthetic and polluted, and less organic and raw.

In both Langa’s and Unite’s works, the character of the acrylic carries conceptual meaning and expression. Unite has added a layer of handwriting in acrylic paint on top of the under layers of mixed media. The writing becomes dissolved and almost ‘confused’, or as signifying distress. Here the chunky substance of the paint carries the emotion and refers to earth and archaeological layering. In Langa’s Mobile home the thin paint produces a meaning of one-dimensionality or poverty, of having very little. 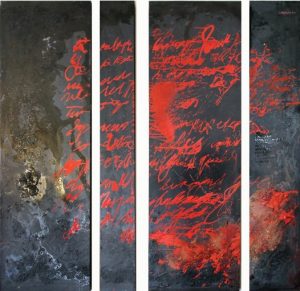 Note: Mainly due to its versatility and fast-drying qualities, acrylic is a popular choice with artists. Acrylic paint is water soluble and made of pigment suspended in acrylic polymer emulsion.  Acrylic paint emerged only during the 1940s and 1950s, and can be used with a range of gels, pastes and other acrylic mixing media. It is especially effective in creating mixed media works (such as in Banele Khoza’s Blue tears), mainly for the fact that once it is dry, acrylic is water resistant; it can be diluted so much as to resemble water colour or gouache; and it mixes well with dry and graphic media such as charcoal, pencil or pastel.

Artists choose whether they want to work in a fast drying medium such as acrylic or watercolour, or a slowly drying oil paint for various pictorial or conceptual reasons. Acrylic can be applied as thickly as oil paint, but it will dry much faster. On the other hand, to create a rich painterly surface, artists often create the underpainting in acrylic and scumble thin layers of transparent colour over the base layers on order to enrich the colour and surface of the work. Transparency can be created in water based or oil  based paints, depending on the method of application. Various painting mixers and mediums can be used to this end in acrylic. In oil painting such a mixer could also be used but artists are more inclined to thin paint with a mixture of refined oil, refined turpentine and a good artist varnish.

The range of colours available to artists vary from brand to brand, but there are ‘classics’ that are available in most brands, such as cobalt blue and titanium white. The cadmium ranges are all non-transparent, making it difficult to layer with them. Most of the purple ranges are transparent. There are transparent and non-transparent properties in a single colour in the top ranges, such as lamp, ivory and mars black. Such choices provide artists with more possibilities in terms of the required shade, hue or tint of the colour, which have expressive and conceptual associations attached.

The more expensive ranges of paint are usually more stable and more resilient than cheaper brands. It is a matter of trial and error, and experimentation. 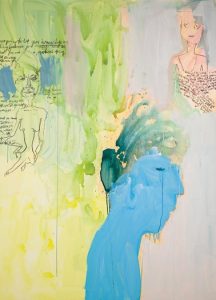